Interview #9 Robert Knemeyer: “We always try to do the right thing first!” 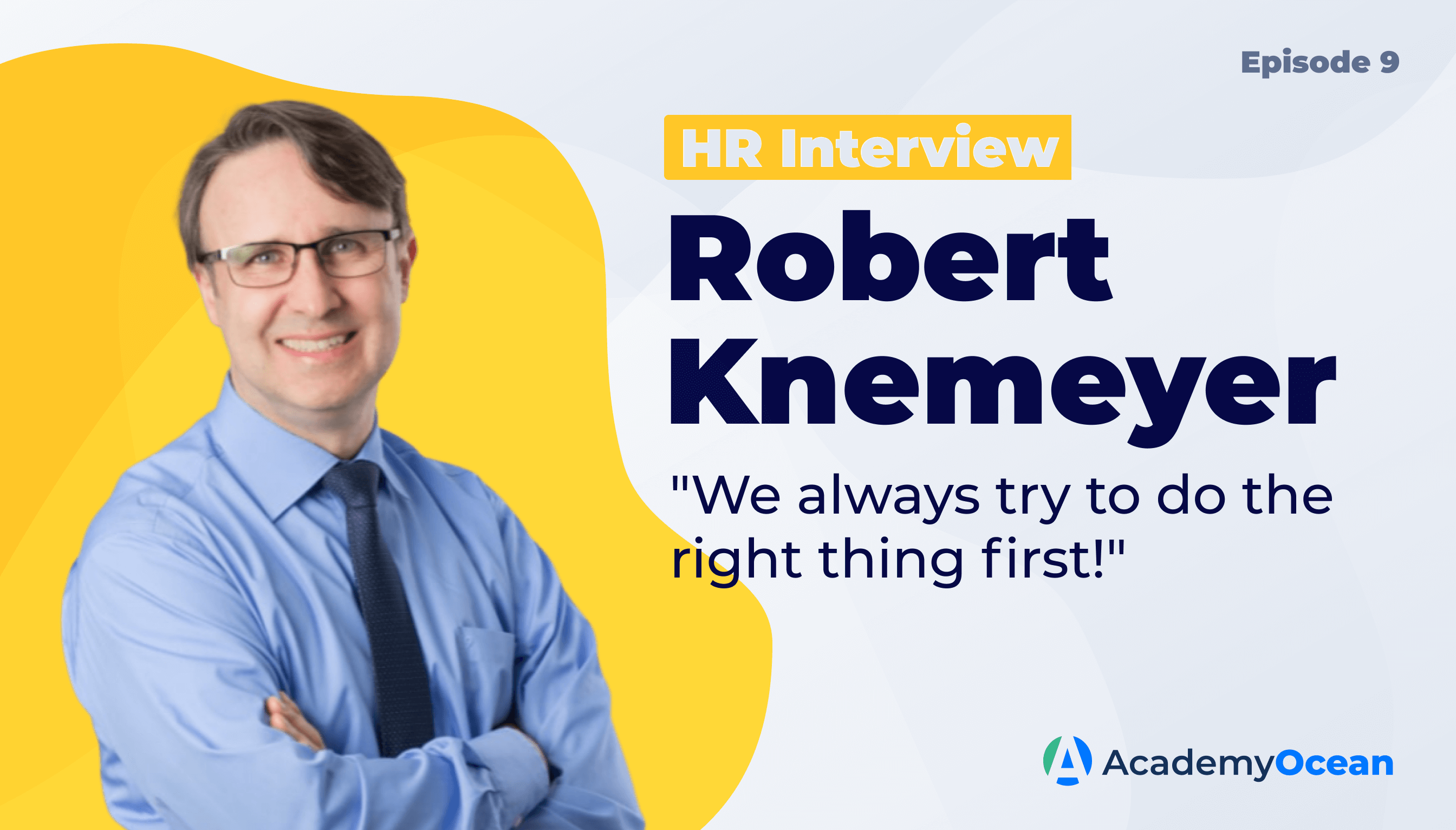 The average time spent by recruiters looking at a resume is just 5 to 7 seconds, with 76% of resumes discarded for having an unprofessional email address.

Today our guest is the founder of KPI-HR, Robert Knemeyer!

Robert started in HR 1992 as a generalist for all services to do in HR. In the next few years, he had several positions in HR in a few companies.

In 2005 he founded his own company and has been self-employed as an interim manager since then in HR. So Robert had a lot of HR projects then and around 40 companies to work with.

Mr. Knemeyer is the owner of the personnel consultancy, offering international interim management services with vast optimization expertise across different industries, and a special focus on HR legislation, tax and social expenses in the German-speaking regions.

We recommend you check the summary of his book "Optimizing of HR". It is describing the most important requirements for creating a contemporary HR organization.

So, let’s start our interview! Read to the end to find out what a regular interview with a candidate can turn into. We assure you it will be very exciting😏

AO: Nice to meet you Robert and let’s start our interview. Here is the first question. Did you work somewhere before becoming an HR professional, why did you decide to become an HR?

R: I have of course worked in different companies and there it often turned out that HR was only seen as a cost factor and no longer the added value. As a result, many companies in the HR department were reduced to purely administrative activities, although this was not the case before. But that wasn't that. Activity that I imagined from HR work.

So I said that I would then go into business for myself by offering the companies their projects that have to be carried out in any case and which are then no longer feasible due to the scarcity of resources.

AO: Where do you see the HR industry in the next 5 years?

R: In the next five years, the main focus will be on no longer using paper as a medium for personnel issues, but on trying to convert all paper processes to digital solutions accordingly. So that the HR department finally does less administrative work and instead concentrates on advancing the HR strategy that should exist in every company. To develop these further with concepts and to advise employees, managers and other relevant stakeholders in the company and to look after them responsibly.

AO: Can you name three areas that you feel need the most improvement, based on your understanding of common HR practices?

R: Of the three most important areas in which one can improve a lot, the first to be mentioned is the filling of management positions in the company. These usually have the greatest impact on both the company's performance and the employees who work in the company. Bad appointments in management usually lead to wrong decisions and also to high fluctuation.

The second point that can be significantly improved is the control of the change processes that are now taking place in many companies and where employees and other people need a lot of support to navigate through these topics.

The third point at the point is then, as a logical consequence, the digitization of the HR processes, so that most of them can then run without paper and are mapped using appropriate technologies. As is already the case in many other areas.

AO: Agree with you, this is really something that many companies need to improve. And what would you say are the biggest challenges of working in HR? and how do you deal with them?

R: The biggest challenges in HR are actually, on the one hand, the issue that no other company area is subject to such changes. And that applies to both the amount of changes, especially in laws and regulations, as well as the speed at which these take place accordingly. Let us just think of how the government decided on short-time work this year. It was completely new territory for everyone, and it is like that every year.

And the second point is that HR in particular suffers from the fact that people often make decisions in companies who are not and are not trained for this and who often make wrong management decisions due to the lack of knowledge, which then have serious consequences. This has extreme consequences, especially when it comes to the selection of technologies, as well as when appointing the right people, where the requirements are often not taken into account. And the damage it does is simply significant.

AO: By the way, the issue of employee training is really being raised in many companies with which we cooperate. Robert, can you name one (or several) HR experts whose work do you highly appreciate or take as an example?

R: An absolute expert whom I really appreciate is Professor Uwe Kanning. At the moment he is probably the leading person for diagnostics in Germany as a whole, which plays a very large role in human resources, especially in recruiting as well as in personnel development and then also in succession planning. Professor Kanning has now been voted into the top ten most important people in his field several times. And it was a great honor for me when I was allowed to write a column with him, which was then published accordingly.

AO: It is really awesome. What traditions your company has and what is your favorite one?

R: The most important thing for us is that regardless of the financial consequences things can sometimes have or whether that might make political sense, we always try to do the right thing first. So the first thing that is not always looked at is what might be politically sensible in order to please, but that is what actually best in the context of the task. And that would include actually getting this topic right the first time.

AO: Very interesting, Robert and how does the onboarding of new employees go into your company?

R: The onboarding takes place in such a way that, of course, the new employee is greeted personally on the first day and then spent the entire day together. That you do nothing else that day than to take care of the new employee, optimally try to get to know your new job, with colleagues. And there is no appreciation for having any other more important topics on this day, especially on your first day at work, that could prevent you from only dealing with them.

AO: Ok, we have a little extraordinary question for you. If the company you work on now were a person, what kind of person would it be?

R: If it were a person then the most important thing would be to have the will to change and improve. That is very important of the personal constellation, that you are not just satisfied with how it is now, that you just want to carry on because it has always worked out well somehow. If we have been taught one thing, especially this year, that is actually the most constant change, and once you have accepted that change is actually the permanent state and you just have to constantly adapt and improve with it, then that can also work well.

AO: Robert, what is the most valuable professional development advice you have ever gotten?

R: At a young age, I got the advice from my first boss, who I had when I got my first HR position, that...

...you have to apply at least once a year and prove on the job market in order to know that your level is still up to date and is also in demand on the market.

And also to know that you continue to be like your current market value. Many people have great difficulty knowing what is your market value in terms of salary and whether the knowledge and skills are still up-to-date if they haven't applied for five, six, seven years? I was told at the time that you have to do this at least once a year.

AO: Has your company experienced switching to remote work? How did you prepare employees for such changes?

R: It was not the case for us that we had to make dramatic changes because the working method of being more digitally on the move with the notebook was actually necessary and had actually been carried out beforehand. In this respect, there have not been as serious changes as may have been the case with other companies that are not so flexible with customers, and are on the move.

AO: And the last our question, Robert, a more relaxing one. What was the funniest/most unusual incident during your HR practice?

R: Perhaps the funniest event was that I was in an interview to fill the position on a project. When the conversation was around like an hour, the candidate we had just interviewed asked me if she might rather have a job as my assistant instead of the job we were interviewing her for? I thought that was very funny because it obviously shows how well the conversation had gone at that point.

AO: Ha ha ha, it is really funny 😅 Thank you, Robert, for sharing your ideas and thoughts. We wish you good luck in all projects and other working aspects.

That's all for today, friends. See you at the next interview!

In case you would like to ask your own questions, write them down in the comments. Also, if you want to read an interview with a particular person, let us know.

Natalie RayneCopywriter
Interview
Previous PostInterview #10 Rachel McCarthy: “My idea of a perfect workday would be a messy excel file that I have to clean, analyze and create a report on:)”
Next Post AcademyOcean September 2020 update

Interview #8 Shannon Pfaff: "I actually ended up in the industry by accident."

Today an American Expat from Germany, lover of animals and food, HR professional Shannon Pfaff will share her thoughts and ideas with us.

Interview #7 Nilima Gandhi: "I did my bachelor’s in Chemistry and soon realized that my passion doesn't lie with chemicals."

Interview #6 Petra Ehrlicher: "Prioritize goals and define B and C in addition to a plan A!"

HR professional with more than 30 years of experience along the employee life/work circle Petra Ehrlicher answers our questions about the current situation in the HR field and tells about her career.